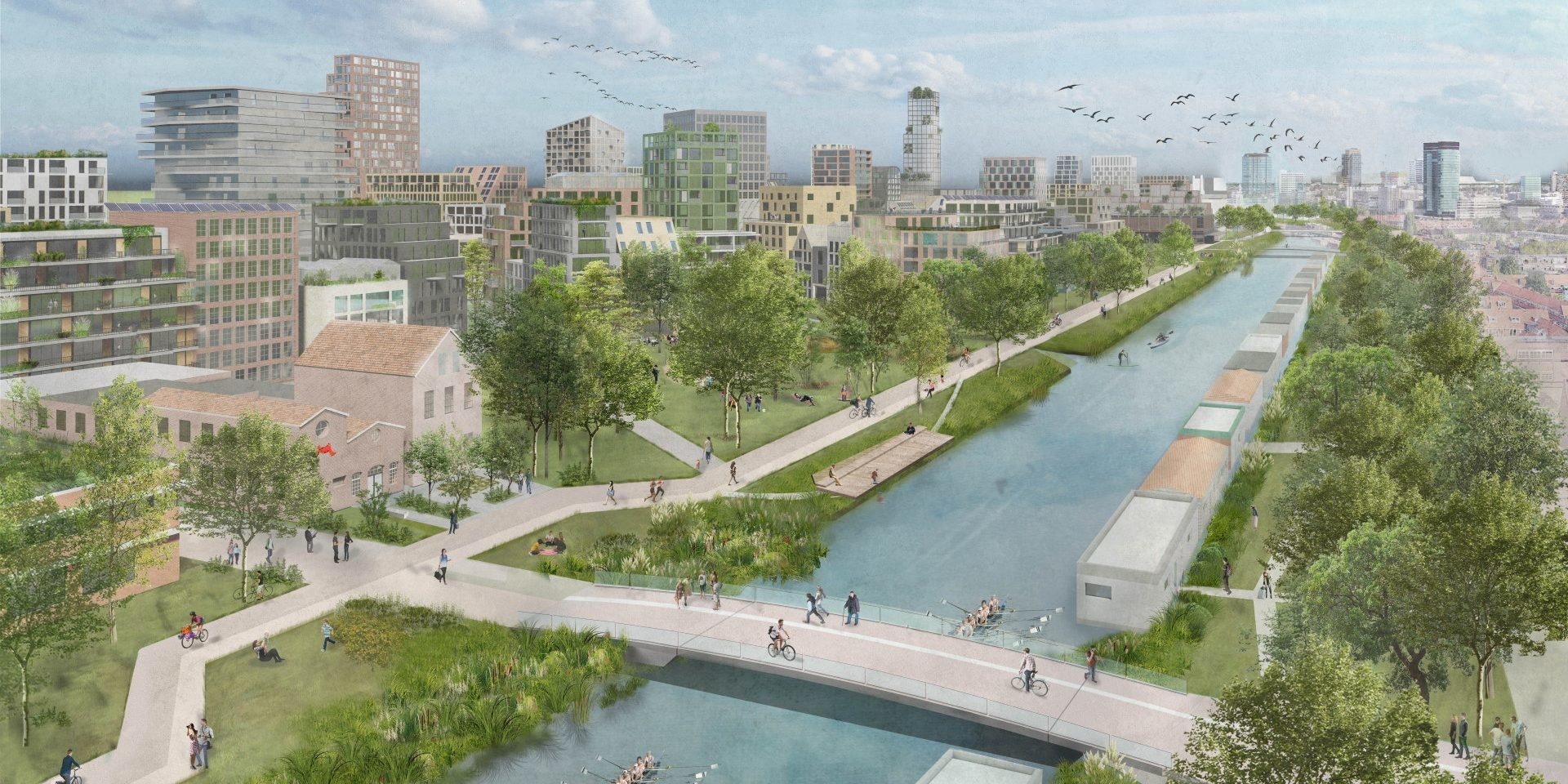 Merwede is a neighbourhood in Utrecht, one of the fastest growing cities in the Netherlands. An old industrial area, it is now undergoing a transformation process based on urban planning criteria that puts clean and shared mobility ahead of the existing prioritisation of road traffic.

The demolition works have already begun and the final project includes sustainable housing for around 12,000 people (the first residents are expected to move in by 2024). The new neighbourhood of Merwede will enable residents to access all the services on foot or using bicycles. It will also be the most sustainable city possible. How is all this public space being redesigned?

Many cities have been designed or re-designed based on private vehicles: more traffic lanes, spaces reserved for parking, public or private car parks, displacement of pedestrian areas… However, this trend seems to be gradually reverting and we are finding more examples of cities and neighbourhoods in which pedestrians have priority and other means of transport.

In the case of Merwede, it is estimated that there will only be three spaces for every 10 households reserved for cars and 300 of these will be for shared vehicles. Clearly, the neighbourhood will have networks and services in place for shared cars and bicycles, with plans for an entire public transport system that will connect the neighbourhood with the whole of the Netherlands. The challenge is obvious: instead of one (or more) cars per household, there will be one car for every three households, which will free the streets of traffic and parking spaces. 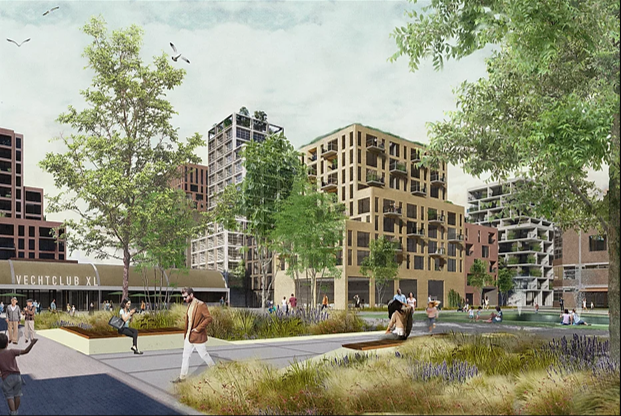 Obviously, the new urban plan restricts the use of private vehicles, however, it also include systems to allow emergency services to access the streets. The heart of the district itself will be a car-free zone, particularly private vehicles.

Getting around Merwede: walking, cycling and public transport

Instead of cars, the project designers are looking to further boost the use of bicycles in Merwede. The starting point for achieving this is good: bicycle use is widespread in the Netherlands, (Bicycle Cities Index 2019 indicates that Utrecht is, in fact, the best city for this form of transport). However, those in charge of the project know that the hardest thing will be changing the mind-set of the inhabitants. They are convinced that “the new city district of Merwede is a good start for a shift from cars to cycling and walking and from private ownership to sharing.”

Changing from motorised forms of transport and choosing bicycles brings with it plenty of benefits. Not just environmental and noise, but also the health of residents. According to figures for the city of Utrecht, every day, between 7 am and 7 pm, more than 100,000 people go to work, school, university, shopping or home through the centre of the city using bicycles. However, the city council wants cycling to be even more attractive for these and other citizens and Utrecht’s mobility policy has this transport system as its central theme. 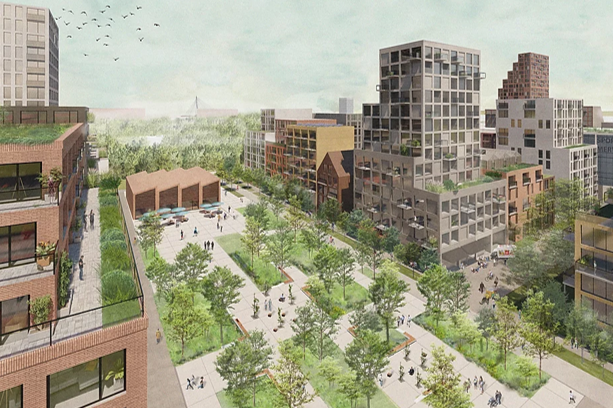 Apart from reducing pollution, cycling can help to reduce stress and the risk of chronic diseases such as heart disease, type-2 diabetes and strokes. Furthermore, bike-friendly cities can also increase the safety of cyclists. An OECD Cycle Safety report found higher levels of awareness in places with large numbers of bike users, cycle paths and supporting infrastructure.

Gardens and solar panels on rooftops to save energy

The redesign of this Dutch neighbourhood is much more than just bikes and green areas. The project designers believe the challenge is for the Merwede example to become a standard, particularly when designing and developing new neighbourhoods. In other words, for us to gradually change our habits, focusing less on cars and more on using more sustainable and healthy forms of transport. 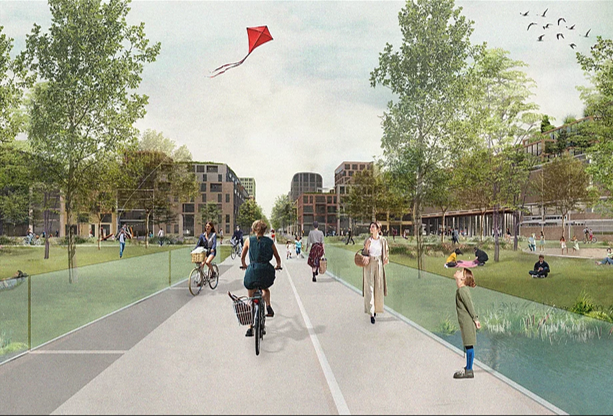 Instead of areas reserved for parking vehicles, Merwede will have lots of green areas and public spaces. In fact, every block that is built in this area will have an interior garden and the idea is for many of them to be accessible to all residents. Supermarkets, schools, medical services, banks…. All services will be within a short distance, so people can go shopping, work and practice sports in the neighbourhood and relax on a terrace in one of the city’s squares without having to use their cars.

Greenery and solar panels will be installed on roofs, with the aim of making the neighbourhood more sustainable. Merwede will also have the largest underground heat and storage facility in the Netherlands to heat and cool the district.

The first steps for reconverting Merwede are underway. This Dutch neighbourhood wants to forget its industrial past and become an example of a sustainable and car-free neighbourhood, accessible to all pedestrians. 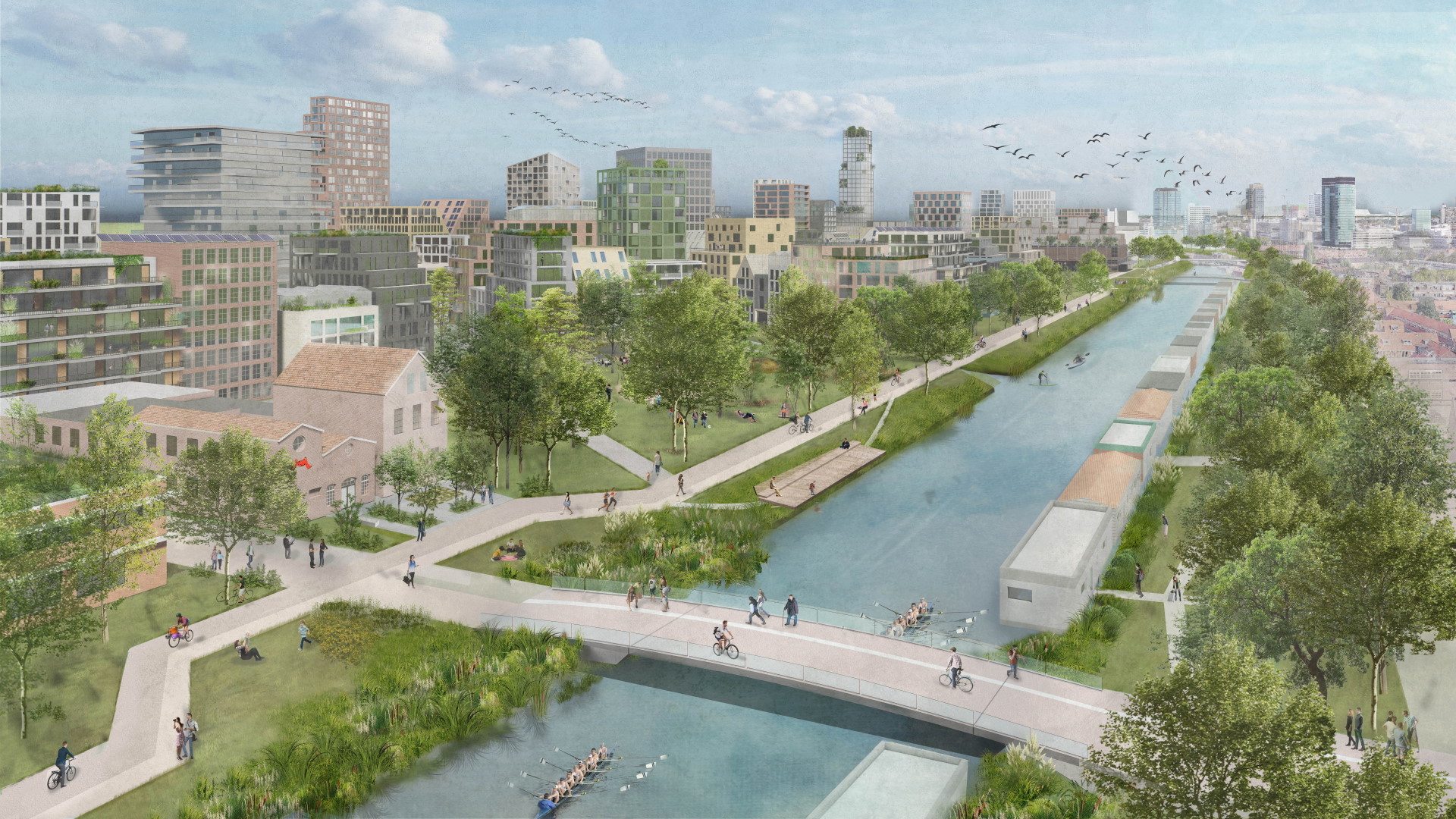