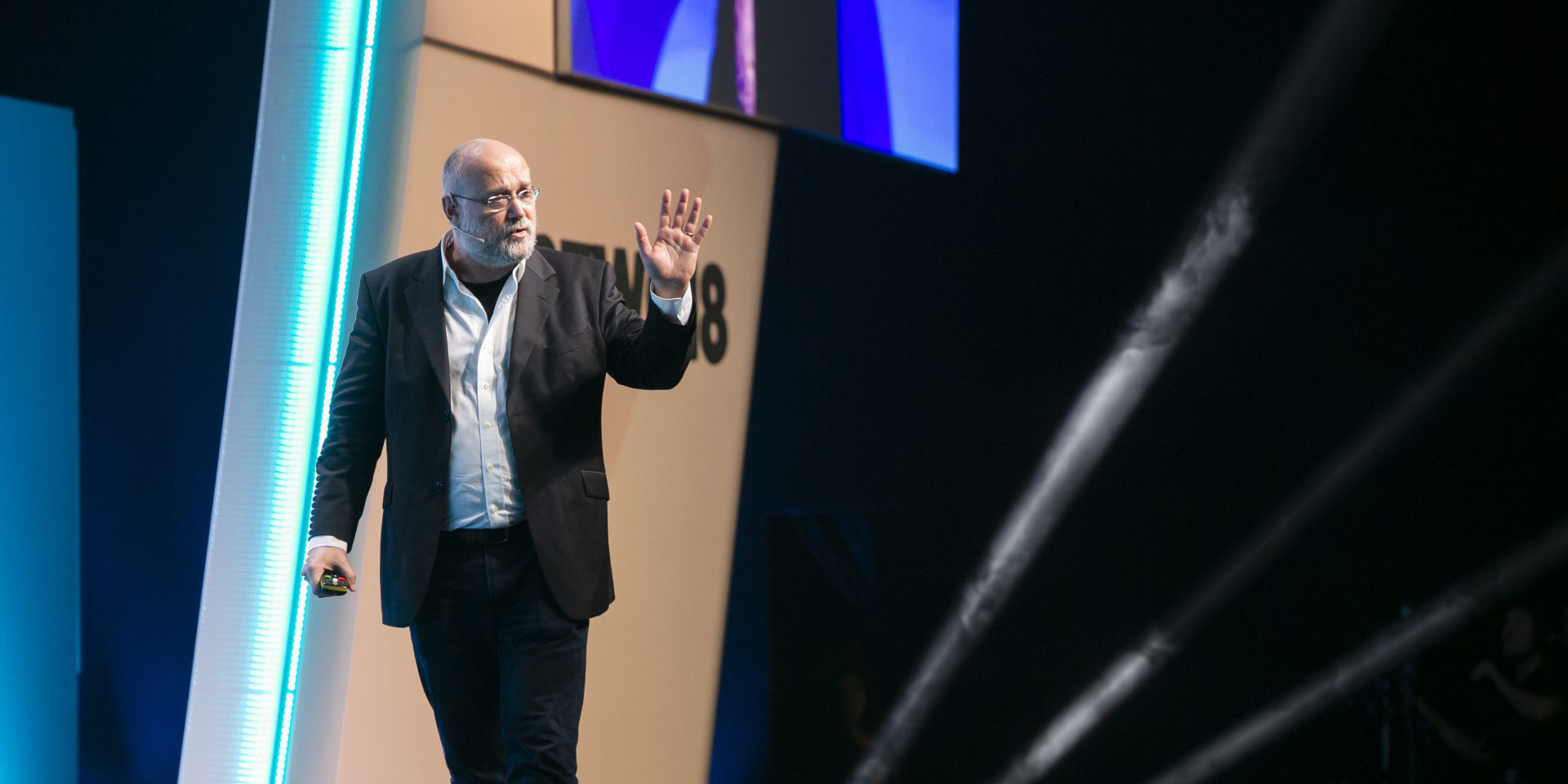 “If you, the regulator/legislator, do not get with the program, your society will fall off the train.”

Prof. Benkler was squarely addressing an audience of city officials sitting across the stage from him at the Smart City Expo World Congress. “It’s a false statement!” He exclaimed. History has demonstrated over and over again, that this is not true.

“There’s a better choice,” he said. Over and over again, we’ve seen proof that in the long run, choosing open standards over proprietary solutions, turns out to have larger encompassing social and economic outcomes.

Prof. Benkler was about to open our eyes to the truth. You see, the choices you make are never just about technology and efficiency. And when you decide to take up new technology, almost always, there’s a social relationship choice involved. Whether you see city services for residents as your clients, or as citizens, members of a democratic community, makes all the difference, he reminded the audience.

A quarter-century of innovation studies

Market innovation has changed. Now’s more of a mix between market and non-market players. We’ve shifted from the rational actor model to a blend of cooperation and competition, and transitioned from a pursuit purely of property to a mix of property and Commons.

We do not think any longer in terms of the “lonely genius,” and we innovate within “learning networks.” How do we achieve thriving innovation clusters? Why do they work in some cities and in others they do not?

Silicon Valley and Route 128 from Michigan, clearly show that “a critical feature of an innovation district is rapid knowledge flow among firms and between academia and government and people outside.”

But yet somehow, efficient markets have not been the rule. More markets fail than thrive; why is that?

“When you design systems that are built to optimize for self-interested rational actors, you crowd out social motivations.”

And that’s where you lose the magic because you make it harder for people to behave in prosocial models which could benefit other people and society as a whole.

“For hundreds of years, communities of people, farmers, herders, fishers, have managed themselves well with a Commons model.” Local knowledge was enough to create sustainable, efficient “resource management systems,” and when governments came in and tried to regulate or shape them, they fell apart.

The internet’s inception literally would not have been possible without being based on a Commons model. Further along the line, free and open-source software has now become the model for “shared non-exclusive ownership.”

“The server farms your clouds are running on, are all running on Linux. Every time you hit a server, there’s a 75-80% chance that is one of several open-source web servers that is answering you.” These are effective mission-critical systems built on a model that we couldn’t dream of possible 20 years ago.

5G vs. Spectrum Commons and the Barcode

We’ll see. — You should at least be dubitante— says Prof. Benkler.

“Open spaces are as critical in data information and innovation infrastructure as they are in the built environment.” and just as you wouldn’t imagine an attractive and innovative city that’s all “malls and private walkways,” so too, you need to think about data and information.

The choices you make are never purely about technology and efficiency. “The ways of organizing the technological ensemble can result in very different social relations.”

“When it was introduced, it dramatically changed the efficiencies of retail supply chains.” Prof. Benkler started talking about the barcode, a technology that has revolutionized commerce.

In the US, the Walmart model produced low wages, low-cost, aggressive competition among suppliers with a lot of concentration of wealth. In contrast, the European model kept strong relations with labor and suppliers.

In each case, they used the technology equally. Retailers had to deal politically with regulators and legislators to get the things they needed, like zoning or permits. And these relations shaped and gave way to very different social models.

The point Prof. Benkler was trying to make here was that every corporation could be subject to persuasion. “You see, the technology companies are sensitive to political pressures. That’s up to the choices that we make.”

What happens with platforms?

“Only if the city comes in and asserts its authority, and allows containing the regulatory avoidance” can we make sure platforms don’t produce adverse outcomes.

Prof. Benkler compared Uber with carpooling. “You are beginning to see apps that are the same technological ensemble, just as we saw with the barcode. It’s a completely different meaning from, ⁠—I’m ordering a service⁠— and builds a community in a very different way.”

Cities are starting to stand up to the challenges these platforms are bringing to the table. “We the city, we the state can come in on the side of those who have no power to help in the bargaining.”

The proof that something is changing is taking place in municipal governments around the world.

New York City is defending the rights of drivers to a minimum wage. Right here at the Smart City Expo World Congress, the Sharing Cities Alliance and summit has just adopted the Sharing Cities Declaration,  “a set of guidelines of how to think about a new platform that comes to town.”

“It’s not just a “Sharing Cities” issue. This choice touches every single one of the sectors represented in this Smart City Expo.”

Cities should be asking themselves some critical questions before they allow any platform to operate within the city’s public space:

Is it more about just creating a consumer-vendor relationship with a commodified exchange, or does it produce something that’s more like a peer to peer collaboration?

Does it increase precarious labor, or does it offer fair wages?

Is it driven by contracts of adhesion without the ability to negotiate, or is it about participatory community governance?

What happens to the data is critical

“You cannot have democratic accountability without knowing who is doing what where and to whom and to what effect.” Cities need to extract data — by regulatory arbitrage or taking responsibility for impact.

Prof. Benkler then referred to Barcelona DECODE, which allows citizens data autonomy. If you are a city, aren’t you in the pursue of the same ideals?

He was talking about having a digital infrastructure with an open data architecture, which “allows citizens to know what’s happening,” in contrast to “a proprietary database that controls it.”

Only transparency and accountability can assure democratic accountability.  Don’t fall for AI, “it’s just a complicated machine. There is no way to export responsibility to the ghost in the machine.”

Yochai Benkler is an economist, lawyer, Lecturer at the Faculty of Law of Harvard University and the co-director of the Berkman Klein Center for Internet & Society at the same university.